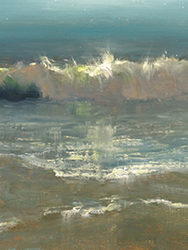 “Wishing to get a better view than I had yet had of the ocean, which, we are told, covers more than two-thirds of the globe, but of which a man who lives a few miles inland may never see any trace, more than of another world, I made a visit to Cape Cod.” — Henry David Thoreau

Artists’ reception and exhibit, at the beautiful Eastham Public Library, featuring scenes immortalized by Henry David Thoreau and cherished by us today.

In addition to meeting contemporary artists, the public is invited to join us in a step back to the mid-1800s and meet Henry David Thoreau (portrayed by historian Richard Smith) and a chat about his visits to Cape Cod. For more than 20 years, Smith has “become” Thoreau, dressing in meticulous 19th-century regalia, sounding philosophical and looking as pensive as Henry. He has been featured on C-Span’s “American Writers” series, BostonTV5’s “Chronicle”, and traveled the country presenting Thoreau’s essays for libraries, historical societies and schools.